Consolidate and Standardize – The Value of Universal Prevention

Prior to HeelAHip®, the patient must rely on nurses to continuously offload the heels. To that end, heel ulcers are the second most common location for pressure ulcers. Pressure injury is particularly prevalent in surgical patients. Pillows and heel boots can be cumbersome and heel boots may hyperextend the popliteal vein and lead to venous pooling. Pillows are challenging to place correctly, comfortably, and consistently using the traditional abductor. 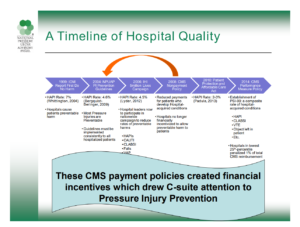 This timeline of quality as detailed in a presentation to the National Pressure Ulcer Advisory Panel by William Padula, PhD shows that financial incentives that were instituted for preventable injuries during care drew attention to pressure injury prevention as a potential area to save money. 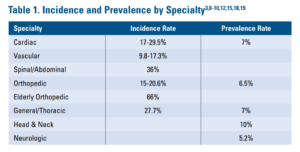 Joyce Black speaks on: Patients with immobile legs … such as fractured hips3

516 of 1083 patients (47.6%) developed pressure ulcers without positioning device on the limb9

One product can do the job

PRA Medical Systems is committed to the development of innovative pressure management products.

Approximately 600,000 hip replacements are performed annually in the United States.
Prior to Heel A Hip, one must rely on nurses to continuously offload the heels with pillows or heel boots.

Heel ulcers are the second most common location for pressure ulcers.

Pillows and heel boots are incompatible with the abductor wedge as demonstrated by the 91% incidence of developing FAPU (facility acquired pressure ulcers) on the heels with Braden scores of 15-18.

Pillows are challenging to maintain proper placement and consistency, in addition to high nursing demands.

Heel ulcers are costly and if not treated properly may lead to cellulites and or osteomyelitis. Both have the potential to cause sepsis and death.

Pressure Ulcers as a secondary diagnosis have increased 212,000 since 1993. 1 in 8 admissions ended in death.